Hickory Golf Days in the UK by Timewarp Golf 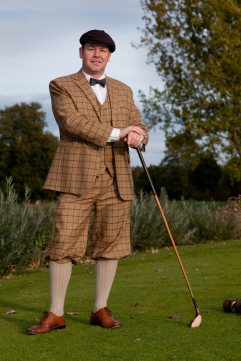 Hello and welcome. My name is Gavin Bottrell and I live in rural Warwickshire.

I became interested in collecting old hickory golf clubs in 1998 and started my company Timewarp Golf in 2004. For many years, running hickory golf days, and restoring old golf clubs, was just something I did alongside working full-time in a "normal job" !

In April 2021 I decided that it was time to turn my hobby business into a full-time occupation and so far so good!

Since 2004 I've run over 100 hickory golf events all over the UK, and as far away as mainland China. If I'm not running a hickory golf event I can be found in my workshop restoring and repairing old clubs. Additionally, I enjoy making museum quality replicas of ancient golfing equipment and writing about aspects of golf history for magazines and journals. 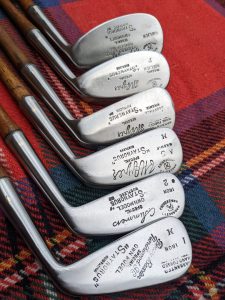 If you are seeking some hickory golf clubs please get in touch. I always have some sets available.

I live in the UK but ship worldwide.

If you let me know your size and handicap I can advise which clubs would be most suitable for you.

I also make up sets (as they did in the hickory golf era) from different makers but that are suited to your requirments in terms of club specifications (i.e loft, lie, length, swingweight, grip size). 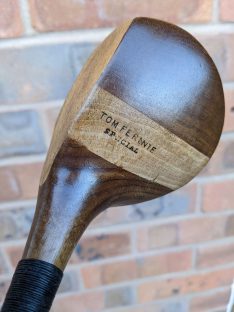 Contact me if you are looking for clubs for hickory golf play.

What is Hickory Golf ?

Hickory wood comes from North America and up until 1929 it was the choice of material for making the shafts of golf clubs. In the 1980s very small groups of enthusiasts started collecting old golf clubs and occassionally playing with them. Over the last four decades interest in the rich 500 year history of golf has continued to grow and "Hickory Golf", that is the playing of the game with original vintage wooden shafted clubs, has become a hugely enjoyable pastime for entusiasts, club golfers, or once-a-year players of all abilities.

Now is your opportunity to travel back in time and experience what golf was like in the years that are often referred to as a the "golden era". You'll be provided with a 7-club set of genuine antique clubs in a smart leather carry bag... and yes, these are the real things, they are not replicas! (See below on what a set consists of).

The game was less focused on sheer power and more on style in the golden era! Hickory Golf can be part of club centenary celebrations, captains days, golf society outings, charity days, away days,  stag and hen do's (yes, really), corporate golf days....or just because you and some friends fancy doing something different.

You don't need a set number of participants to hold a hickory golf event. I've done events for all sizes of groups,  ranging from a single player who was visiting the UK on a golfing pilgrimage, to very large events of 250 players including sporting stars, golf professionals, celebrities and royalty. I charge a flat rate that is independent of group size. My day package price starts at £399 and increases in small increments depending on how far I have to travel from my home in the Mifdlands to get to your venue - it really is that simple.

Dressing up is never compulsory but it always adds to the fun!

Below you'll find a link to a video on my YouTube channel taken during a typical event in 2021. 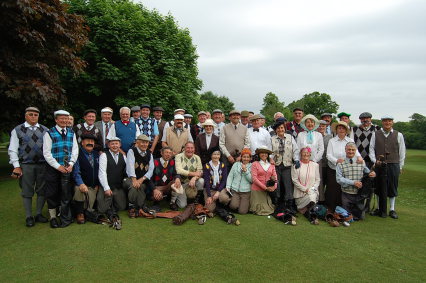 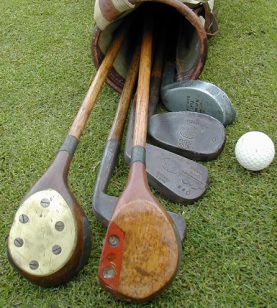 Here's just some of the organisations and golf clubs that I've worked with:

Whether you're just making an initial "what's it about? " enquiry, or you've got a firm venue in mind, please don't hesitate to get in touch...I'd be delighted to advise you on what can make your event a roaring and memorable success.

"It was absolutely fascinating. I was amazed how well
you can hit the ball with the old clubs!“
David Edwards, Director of Golf, Forest Pines

“We had a great time playing with the old clubs”
Paul Barrington, PGA golf professional
and British Long Drive Champion

“Thanks for your help. We raised £7,000 for charity”
Mark Brook, The Players Club, Bristol

What clubs make up a Hickory Golf set?

During the hickory era golfers played with far fewer clubs than are deemed "necessary" today. Accordingly, during your Hickory Golf day you'll be provided with a genuine set of clubs consisting of the following :

"Driver" - hickory era Drivers had lofts ranging from 7 to 12 degrees....not much has changed then!

"Brassie" - this is a fairway wood and has a real brass plate on the sole of the head. Lofts range from 13 to 25 degrees ...great fun!

"Mid-Iron" - the term "mid" is a bit confusing as this is the longest iron and is the equivalent of a modern 5 iron.

"Mashie"- the equivalent of a modern 7 iron.

"Mashie-Niblick" - the equivalent of a modern 9 iron.'

"Niblick" - the most lofted iron in the bag and they range between 50 and 65 degrees...but most are like a modern gap or 52 degree wedge.

"Putter".... yes, you;ve guessed it....modern equivalent would be a putter.

What are hickory golf clubs like to play with?

The hickory clubs you'll be using are not replicas, they are genuinely old... the youngest club date from the very early 1930s; the oldest from the 1890s. Most of my clubs date from the 1920s. They are surprisingly robust...and after all they've survived from then until now!

I liken hickory golf to driving an older car....at first you might want to take things a bit gentler and concentrate on smoothness....but then once you get used to it you can speed things up a bit. I don't think it's a coincidence that people often say " I swung within myself more than usual...and actually I scored pretty good".... at this point the club pro will be nodding in the background. 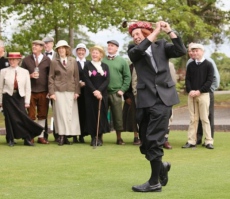 If you are looking to buy some hickory golf clubs...

A considerable part of my (now) full-time business is providing hickory golfers all over the world with high quality restored clubs. Whether you're someone who's completely new to the "hickory golf" world, an experienced player, or a seasoned collector of antique golfing equipment I can help. Here's a few examples of what I can provice:

Fully restored playable sets of antique hickory shafted clubs. These can range from 6 club sets up to 12 clubs sets. I have an extensive stock of both right and left handed clubs. 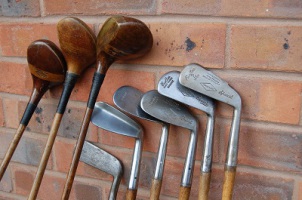 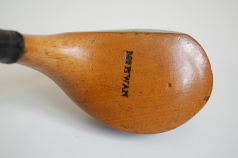 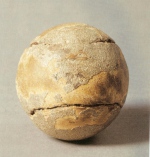 Rare pre-1850 Feathery golf balls, Priced according to condition and maker. The dream of every golf collector across the world. 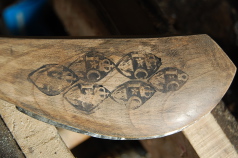 Handmade ( by me ), replicas of some of the oldest known golf clubs dating from the 17th century. 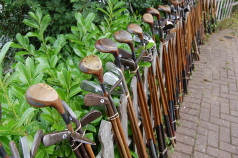 We are located at:

Get social with us.

If you have any queries please don't hesitate to contact me directly anytime between 8am and 8pm: